Practicing my way into new ways of working

At work, how often do you catch yourself saying: “If only X would be different then I/we would …”?

About 1.5 years into my first ‘real’ job I had thoughts like this all the time and was wondering: how could the teams interact better so that the project ran more smoothly? How could we get the most out of a client meeting to avoid confusion in our approach? Why can’t they make sure the same people aren’t always working overtime while others don’t have enough to keep them busy?

These ideas got stronger during the company reorganisation, a downsizing one year and rapid hiring of staff the next, and a full relocation to a different part of town. Each time we were informed of the decisions that had been made – without much effort to stop and ask us what we were experiencing.

I started asking for meetings with my bosses and other team leaders – trying to engage them in the potential I hoped for.

I was convinced that if a few things were tweaked, a few approaches revised – namely that if other people started doing things differently – that everything would run more smoothly – we’d get more done and have fewer frustrated colleagues.

I ended up leaving that job 2 years later – disengaged, frustrated by the hierarchy and feeling broken by the corporate system.

A few months before I resigned, I contacted Ria Baeck because I heard she was involved with Percolab Belgium. She immediately responded to my request to learn more and we set up a time to talk. During our chat, she invited me to the team’s first retreat – 4 days working, exploring, cooking together… there was no fixed or planned agenda, but everyone was welcome to come with an open mind and topics to share and talk about. We’d see what emerged together.

The retreat was an intense experience for me – linguistically, personally. I felt comfortable – “this way of working is what I’ve been looking for” on the one hand, and in over my head – “there’s so much I still need to learn, am I ready for this?” on the other.

I left the retreat a day early but grateful for the first step. I kept in touch with several team members and was encouraged to join (my second) Art of Hosting training a few months later. Samantha Slade, one of the co-founders of Percolab, was coming from Canada to help give the training and since I had already heard so much about her book and seen how the team was working in person, I was curious to learn more.

Since I’m in the process of changing careers and venturing into new (for me) territory of how people can relate, communicate and work together, I spend a lot of time reading and reflecting.

Going Horizontal is full of ideas and straightforward practices of how people can work differently, and Sam makes new ways of working seem so simple. I couldn’t help but think: “If only I could have read this book before. Things could have been so different…”

Not only that, the team in Belgium has welcomed me to attend their weekly virtual meetings and monthly in-person meeting with open arms. So what are some of the takeaways that I have been learning? Here are just a few:

The most fundamental thing that Sam’s book made me realise is about mind set: I don’t need to ask permission from a hierarchy to act in a way that comes naturally to us all. Outside of work, I’m a functioning adult who can take care of myself and decide with others how to get things done. Why should this change the moment I enter the workplace?  During our meetings, no one is assigned to do anything – there are open questions such as: ‘who wants to lead us today?’ and ‘who would like to follow up with…?’ Different people volunteer each time.

This goes hand-in-hand with the second thing the book helped me come to terms with – how I interact with others is my own responsibility. It is easy to point fingers and say someone else needs to change – but who am I to tell anyone else how to behave? A much more powerful option is to start practicing myself – hold myself accountable for how we can work together better or be more efficient with that client work, and let my colleagues know that I’m holding them accountable for their contribution. It’s simple, yet revolutionary.

Next, showing up as a whole person. Sometimes people are having a bad day, week or month. Sometimes we have headaches, heartaches, restless nights and too much going on to be in the here and now. Working with Percolab has taught me that that’s all okay. What’s important – and expected – is that you state it during the check in. Then you can decide if you remain in the meeting or if you sit that one out to take care of yourself. We keep minutes and people can always read over them another time. This approach is a huge difference to many workplaces, which expect personal matters to stay at home, but there’s a strong need for personal responsibility to make it work (more of which you can read about here).

The fourth element relates to the commons – sharing what works widely and openly. The fact that Ria and the rest of the team invited me (and 3 other ‘external’ people) to their retreat was the first indication of their transparency. Then I was included in the meetings and added to their Slack channel. They know I’m still figuring out what I’d like to do with my freelancing career and that I’m looking for like-minded people to work with and learn from. No one has asked me to commit to anything, yet they insist: ‘you are welcome anytime you want’. During the meetings, I contribute what I am able to and can ask for their advice or feedback on any projects I am involved with. And, yes, this has led us to start working on some common projects.

Finally, it is all about practice. This was not a new idea for me, but it was presented with such a nice angle in Sam’s book that I’d like to share it here: “Somewhere the notion of practice got mixed up with the notion of expertise. Thinking in terms of expertise can make us feel incompetent or no longer in need of more learning. By contrast, practice accepts us exactly where we are. … It’s a never-ending path of doing, tweaking and doing again.”

So I’d really like to thank the team – Ria, An, Ilona, Ivo and Joke – for the opportunity to practice and learn each week. 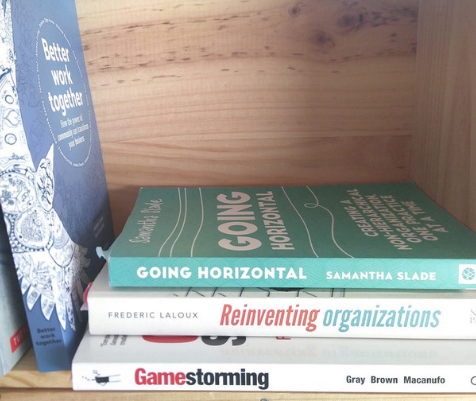 If you can relate to my first work story above – or want to make sure that you don’t ever have to relate to it – I invite you to learn more about ‘Going Horizontal’ or contact Percolab to start a conversation. Mainly because I firmly believe no one should have to feel day after day that they aren’t living up to their full potential or that they lack control over how they can meaningfully contribute at work.

In addition to the book, there are eLearnings and international trainings being organised. Anyone can pick up these practices and apply them to their personal context – all you have to do is get started.

Trained in the Art of Hosting and Harvesting, Marina is exploring the world of participatory practices in communities and organisations. After working at a multinational company for several years, she decided to dedicate her energy to bringing a human-centred perspective to organisations and supporting meaningful conversations through co-creation. Originally from the US, Marina currently lives in Ghent, Belgium and speaks Dutch and some French.